On 26th march, 2021 parents orientation program was conducted at Shree Gramonnati Secondary School were 68 participants participated in the program. Going through the program it was seen that parents had positive response before the startment of session. They were alternatively listening and comparing their experience and knowledge. They also did realize about the importance of bound, support and their role in child’s development

On 31st March, 2021 Parents orientation program was conducted at Jay Bageshwori Women Center were 44 participants attended the program. During the program most of the parents realized that they were emotionally and mentally different from their child and even the small thing matter for strengthening the bound of their relationship which could help for the development of the children. Many parents accepted that they still use authoritative parenting style without knowing its consequences. 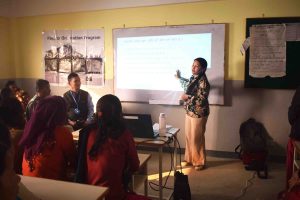