Nepal Jesuit Social Institute has been conducting awareness programs in various places to aware and educate women on Constitution of Nepal and Fundamental rights and also to share knowledge on women’s right, gender based violence and SRHR. On 14th October, NJSI team went to Jaretar, Kavre to conduct Paralegal Program for 2 days. Jaretar is a small village, 45 minutes driveway from Panchkhal Bazaar, inhabited majorly by the people of Danuwar community. 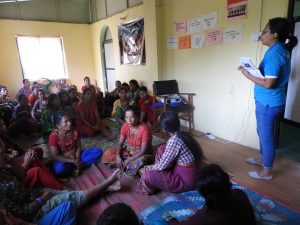 On the very first day of the training participants were made aware of the Fundamental rights of every Nepali citizen as mentioned in the Constitution of Nepal and on the second day, the program started with a role playing skit for explaining hegemony in the society. The participants themselves participated in the skit and experienced and learned the meaning of it. The team then worked with the participants to understand and explain Gender based violence and basic components of Sexual and Reproductive Health and Rights. Post evaluation was also carried out to ascertain that the participants had understood what was delivered to them in the two day program. Certificates and refreshment were provided to the participants to mark the end of the program. 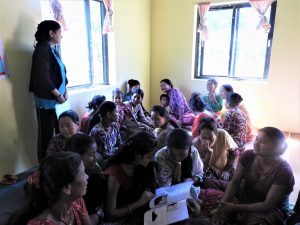 It was found that many of the participants had not heard about something as Fundamental Rights and Constitution Rights or even Constitution in itself. Those who had heard about it, had little or no idea about what it comprised. The women opened up a little more after the skit and role play. They put out their queries, enacted skits and were more active throughout the program. Towards the end of the program, they kept on asking if we had more content to talk with them about which was out of their curiosity to learn more.