Nepal Jesuit Social Institute Constructed “Lift Irrigation Project” to the people of Khadadevi Rural Municipality, ward no.1, Ramechhap.  NJSI Constructed two big reservoir tanks, one of 200000 Liters of  tank and another of 18000 Liters along with well at the river side of 10.6m depth. For the distribution of the water 1600m horizontal length and 400m vertical height of pipe was placed with 34 stations.  The whole village was facing water problem as the village lies in rain shadow area.

They were unable to grow foods and crops due to dry land. On 28th Dec, 2020 the project was inaugurated and handed over to the local people in the presence of chairman and some representatives of Khadadevi Rural Municipality and local people. This project was funded by Xavier Network and Caritas Italiana. The program was carried out with few dances by children, speech from chairman, representatives, regional director and director of NJSI. Local people were very Thankful to NJSI and the donors. 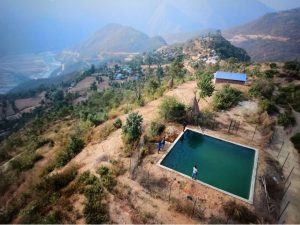